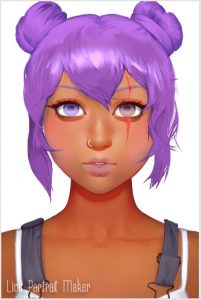 Extras: Implants include extra spinal vertebrae and a three prong jack (like a EU plug) that she can plug in various extra appendages into [Example: tails to enhance balance [snow leopard/bobcat], tail to swim through water [like an alligator/crocodile]) several ports and jacks on forearms and upper thighs and along the spine and base of the skull.

Has a small 7 legged spider-bot that follows her around and monitors her vitals, occasionally jacking into an available port to test blood vitals.

Forcefully implanted and tortured by [REDACTED} and escaped by actually dying and when they dumped subject like trash. The fall subsequently restarted her heart.

Subject wandered around for an undisclosed amount of time incoherent until she was taken in and cared for by a small community until she was able to care for herself. Now she explores dark caves for goodies and relics and sends a portion of her payments back to her foster community to care for the growing number of orphan children taken in.

Known info:
London was your average run of the mill twenty-something. She visited her parents once a week for dinner, had a small apartment where she worked remotely for a small branch of SVT Securities and secretly lived her best life as a character in a popular MMO.

On the evening of her parent’s 35th anniversary as they waited for entrees but not quite long enough to have finished their drinks her parents and like, half the restaurant got weird. Her dad stopped talking mid sentence about taking the boat out for a spin and waxing poetic about sailing around the world to stare vacantly, his pupils dilating from small to large and back again at different intervals.

Her mother simply stood up, let out a blood curdling scream, grabs a knife off the table and stabs her husband of 35 years in the side of the neck, the whole while demanding ‘It’ be returned to her this instant!.’ The other half of the restaurant was screaming and running away or attempting to rouse the suddenly comatose or wrestling down the newly homicidal and self harming.

Meanwhile as she scrambled away from her mother’s sudden psychotic break, she remembers the television was on the news, the lower banner on the screen reporting worldwide bouts of unprecedented violence across every sector of the planet and affecting every social class with impunity.

Scooting until her back pressed against the windowed wall in complete shock, mere seconds later– an eternity in her brain as the image is permanently seared into her brain- a car shatters through the window above her; driving directly into the chair where she had only seconds ago, vacated; crashing into her now insane, blood spattered mother and killing her instantly.

Scrambling out of the now shattered window, London escaped into the chaotic streets and ran the entire 15 miles to her home, promptly locking herself in and hid in her claw-foot bathtub.

Her employment at SVT was in a small virtual think tank and experimental coding, specializing in human/robotic interfaces

with a focus on cybernetic appendage interfacing, implanted dermal jacks and intracranial and seamless neural network interfacing and porting.

Amali Suresh, née Kenderton was powder keg of personality standing tall at 5’ flat. With an hourglass figure topped by a tumbling mass of corkscrew salt and pepper curls usually worn either tucked behind an ear or clipped away from her face. Her face was dominated by large light brown doe eyes and a lips that were perpetually upturned in a smile; a slightly upturned nose dotted the center of her visage. Especially when she looked up at her husband or her beloved daughter, London.

Born and raised in the swamps surrounding Houma, Louisiana, Amali was no stranger to heartache that is found in the area an all of its trappings, the Kenderton children grew up being instilled with a drive to escape the invasive cycle by getting full scholarships to prestigious schools. Striving to pull the rest of her family out of the poverty she had escaped, Amali pursued a degree in Corporate Law, eventually pulling the interest of certain big shots in the SVT law department. After passing the bar exam she was swept deep into the heart of her chosen field, excelling and gaining the reputation of being a brutal opponent. Often her technique with words was likened to a bull shark with the precision of a surgeon; sleek, savage and swiftly fatal for those who waded into her proverbial waters.

After quickly rising to the top of her field, Amali met and soon married Pritum, giving birth to their first child within the first year.

Pritum Suresh was the second son of Indian immigrants who had come to Denmark for a better life. Instilled with their work ethic, Pritum excelled in Engineering, receiving his degree a full year early and later, at his job as head of the Aquatic Engineering department for a lucrative boat company before it was bought by SVT Enterprises. After being ‘let go’ he started his own tech company, shortly after meeting Amali at the last company mixer he attended. Six months and a whirlwind romance (culminating in a small intimate wedding attended by both sets of parents and Amali’s only sibling) later they blissfully announced the imminent arrival of their first child, London.

Standing at 5’8 Pritum was conventionally attractive, quiet, thoughtful and often wandering around the campus oblivious of the sexually appraising glances of his fellow students as he cracked the codes to whatever problem he happened to be working on at the time. After starting his own boutique boat building company and donating half the profits to various charities for children, sold his company to SVT subdivision for undisclosed 11 figures.