The world was falling apart but there was never much to it anyway.

My hands still sting from catching an actual pineapple thrown at me by mechanical arms. Who throws a pineapple? They’re prickly. How would I even open this thing up? Why am I still carrying this prickly, painful piece of locked away fruit with me? When did I start getting sentimental?

The past five months with Coda have been something. I wonder how she thought of it… I don’t think I mentioned her lack of blinking or any of that human stuff once. Honestly, it was the most comfortable I could have been. Who needs all that humanity anyway?

What a trip this has been. A lot of bad, some good, mostly bad. Pulled from the streets, from the alleys and scrapyards. Pulled from digging through the dumpsters of tech companies and thrift stores. Pulled from my life, really. My life, whatever that means.

I’ve had some clarity these past few months. Never had much back home, outside of the comedown from a high. Back then, it’s all tunnel vision. Look for tech, get the tech, use the tech, repeat. Like a shark in an ocean of garbage, I couldn’t slow down, or I’d die. Now look at me. I’ve slowed down and I’m about to die. Who knew there was such wisdom in my junkie past?

Since I first woke up with the others and we’ve been running from crazy threat after crazy threat, I’ve had no anchor. Even my normal means of stabilizing myself have been few and far between. The highs have been great when I’ve got them, but they were so far apart I had felt like bored dog, chewing on the furniture and getting caught in curtains because I didn’t know what to do otherwise.

But this past five months… well, rescuing people from a collapsing planet with a time limit gives you some focus. The tech I’ve found has been a great way to relax the nerves and cool my brain down, but everything seems so much quieter at the end of the world.

The ground is shaking.

Did I make the right choice? I spent this whole time trying to get back home, even trying to make a deal with the devil to do that, but when I finally had the chance… none of them were going back. It would have just been me, alone, again. That’s what I thought I wanted until I finally had a chance to have it. Then, the reality of it all hit me and I knew I couldn’t go back, not anymore. And live in this weirdo future? Alone? That seems even worse. I don’t mind being a rat in the sewers, but the sewers made no sense here. And I sure as hell wasn’t going to work for the SVT, even with Michael…

If Michael had chosen anything else… maybe I would have went with her. It’s not every life you befriend your own guardian angel… look at me. Every life? Angel? This world is rock and meat and that’s all there is… but Michael? Well, she was more than that, wasn’t she?

And, I didn’t want to be a burden on her anymore. Maybe I shouldn’t have read her mind… but she has a better chance in becoming a whole person than I do. And an even better chance doing it without me hanging around.

I just didn’t want her to stop me or for her to convince me not to stay. I have to see what’s next. One way or the other.

If I’m right and I’m sure I am, then when everything ends here, everything will end for me. That’s it. I can finally rest and stop chasing the next high, stop running from the next threat, stop feeling less than a bug. No one will try to use me or convince me of past lives. I’ll just be… done.

And, if I’m wrong? Well, there could be worse things to be wrong about.

I need to sit down, it’s getting hard to keep my balance on this ground.

Did I make the right choice?

Should I have gone with her anyway?

I’ve never missed as single person in my life! But now? Now? At the end of my life I’m missing someone? How’s that fair? Why do I miss her noodle brain getting slang wrong and her ripping batteries out of my car and her wings keeping me dry and those stupid wings flying overhead…?

The ground is collapsing into itself in the distance, fire spilling out of the core.

I have to admit, even without her here, I feel good. Maybe the best I’ve ever felt in my whole life. It doesn’t… itch so much right now. I don’t need to plug into anything. Even though the world is a cacophony of thunder and quakes, inside… inside me, it’s finally quiet.

It would just be nice if she was here.

I’ll do it! Okay, you stupid noodle bird! I’ll do it! I’ll try it! My last stupid action in my stupid life will be to try something I know is stupid! You made me stupid! I hope you’re happy!

The ground under me opens up and 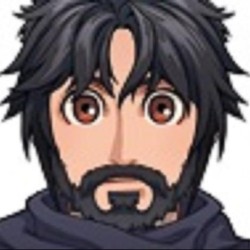 DuskvsTweak
DuskvsTweak streams, podcasts, videos, writes... and he should do all of that more.

RIP John. You were the best.