He didn’t change his mind. 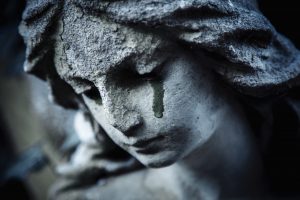 He was hunched over what was once a dumpster, his clothes hung in strips from his dirt and grime covered body. He stilled as he realized he wasn’t alone, and slowly turned to face her. His eyes had a strange emptiness that made Michael’s heart ache.

“You may be able to hide from Lilith, but you can’t hide from me.” Her voice was even, despite the tightness in her chest or the way her fingers gripped the hilt of her sword too tightly. She had found Lilith’s empty body first, she knew how this fight would go, and her soul cried out at the utter cruelty of it. Fire spilled over the surface of her dark blade, acting as a beacon in this dark world that had become earth’s surface.

The empty body of Gabriel opened his mouth and let out an ear splitting scream that had Michael wincing in pain. His wings spread out from his back in a menacing threat of his power, warning her away. Even without his soul, Gabriel was a terrifying sight on the battlefield. But, Michael didn’t flinch. Her own wings answered the silent challenge, a beautiful white that fell from her back, reflecting the little light to pierce the shadows of the ruined buildings surrounding them. The moment seemed to stretch on forever, in an ugly parody of how they lived their lives in this cursed timeline.

The skin of her knuckles flexed and paled a moment before she disappeared. To human eyes, at least, it would seem like magic. Michael reappeared at his side, her body in mid movement as her wings carried her through the motion. Oran cut through the darkness with a silent scream of fire as she aimed to take her once lover’s head.

But Gabriel’s eyes weren’t human, and he was ready for her aggressive first strike. His wings shielded his head, Oran cutting through flesh to hit bone. Her sword jerking to an abrupt stop before she could take his wing clean off. Gabriel’s sight tore through the darkness as Michael turned, yanking her sword free. The white light shined over the side of her face, marring the skin of her cheek before she could fully dodge.

Her body twisted away from him, her feet hitting the ground in a low crouch as her blade arched up hungry for a limb. Her sword bit into his side before she flew back a few feet, missing the retribution of his Angel sight barely. Michael’s chest rose and fell with the deep and steady breaths of a solider. The skin over her cheek bone was black, white whips fading from the affronted area. The pain throbbed in sharp stabs but instead of slowing her down, it only woke her up.

Because pain was familiar.

Their battle cast shadows on the dead planet, flashes of brilliant light followed by deafening silence, only to be cut down by the prismatic fight between two beings not of this world. Seeing the battle unfold over the dark surface, one could see why the first humans likened Angels to messengers of the God they worshiped, messengers from a place beyond their own world.

Michael bent her body in midair, her wings giving her the momentum to move with Gabriel’s sight to avoid the worst of the raw power exploding from his gaze. Her blade licked out as she soared overhead, his arms rose and her blade connected. The fire throwing flashes of bright color. The rhythm of battle beat in her blood in a familiar stucco, it was a dance she was intimately acquainted with. Michael felt it, before her mind registered what was happening. The force of his power hit her square in the chest, and she felt her feet leave the ground as she was throw back, and through the ruins of several buildings. Her wings curled around her to protect her from the debris, but she felt her wing break at an odd angle.

When her momentum slowed enough to stop her from going through the next concrete wall, her body slid down the exterior. The ground was cold, and its unforgiving surface felt like a condemnation.

Too little, too late.

Michael shifted her feet trying to get them under her, the pain shot up her spine and out into her left wing. She grit her teeth against the sudden splintering agony that made her legs weaken after their hard won victory to get her vertical.  But she didn’t fall again. Gone was her even breathing, her breaths stuttered out of her chest, the next more desperate than the last. Her red hair dimmed by the ruined world that clung to its’ strands.

She raised her eyes and saw the remnant of Gabriel stalking towards her through the crumbling buildings. Her eyes glowed white and her own sight tore through what was left of the walls. His wings shifted and he was gone before her aim could find him.

“Hellfire.” Michael cursed. She could feel his mind, he wasn’t running. The insanity of it beat into her own, and she grit her teeth at the echoes she felt. She lifted her shoulders and let them fall as her wings spilled out behind her. Michael’s breath caught in her chest at the sudden and sharp reminder that she would not be flying anywhere. The white of her wings were married with blood, the left hanging at the wrong angle. The blood dripping from her temple, fell into her eyes, even as she tried to keep them clear. Then slowly, as if someone had spilled paint over her wings, they started to turn black, blending into her surroundings.

Michael slipped into the darkness as Oran took on another, more sinister form. To an onlooker, it would appear as if the grim reaper had come to reap earth. Few humans would ever realize that Michael, the savior they prayed to, was the same as the reaper in their mythologies. She felt the heavy stillness of that moment in her very bones. Michael had been in more battles that she could recall over the millennia that she had existed as Michael. She would either be victorious here, or her body would be another scar on this dead world.

Michael pressed her back against a crumbling wall and waited. She forced her breathing to come slower, more even.

She didn’t have to wait long.

Gabriel burst through the wall to her right, she side stepped her wings coming up to block the onslaught of the sight. It tore over her bloody wings and she cried out at the utter pain of it. Her wings lifted changing the trajectory of Gabriel’s sight. Her own sight colliding with his as her left foot slid back and her scythe moved in a tight arch.

This was a battle between archangels, and it was a horrifying scene. The very ground shook and cracked with their presence, and the movements were difficult to follow. A block, a hit. Blood coated the ground that their booted feet slid across, somehow barely disturbing their balance.

It was easy to see how warriors like these took back earth.

It was easy to see how devastating a civil war could be to their people.

The connection of their sight broke, and she stepped into the insanity. Michael’s movements adapted perfectly to each of Gabriel’s and it was clear why she was seen as the protector of Heven, why the humans called her the warrior of God. All too easy to see how she led armies to both liberate and destroy worlds. It was simple to see the weapon, and difficult to see the individual behind the myth. It was difficult to see how this moment was carving itself into her being, another scar no one would see. Her blade licked out, hungry for victory, it cut through flesh and bone for the last time.

Michael was breathing in short, hard, little pants, her blade still outstretched next to Gabriel’s head. She didn’t move into the next motion, because she knew what she did. Even as she knew, Michael couldn’t bring herself to believe.

Her chin trembled once, and her eyes shined with unshed tears, and despite how very old she was, Michael appeared almost childlike in the lost that moved over her features. Her delicate fingers reached out to his face, her fingers brushing over his cheek before his head slowly fell back and hit the ground, closely followed by his knees hitting the ruins of this broken world.

Michael barred her teeth at the cruelty of that moment, at how that moment cut deep despite all the reasons it shouldn’t. The pants that attacked her chest, didn’t end. Her eyes staring into the space once occupied by Gabriel’s body. Michael couldn’t bring herself to look down at the violence she wrought. The violence she always brought with her.

Horrible things could happen in silences.

And once the insanity of Gabriel’s mind left her, the silence felt like a weight that would crush her. Michael closed her eyes as she stood in the ashes of a world that she was supposed to save. Another failure to an already long list of could have and should have.

That feeling of loneliness that hadn’t left her since stepping through the portal to the true world, creeped deeper into the open wounds.

But before that feeling could press in, she felt something else. Two familiar souls. Nearby. Michael’s jaw tensed now for a different reason.

I’m not leaving without you.

Michael opened her eyes and stared off in the direction she could feel that familiar presence. Even though she knew this moment was going to be fleeting, she didn’t feel so alone. He was here.

Humans changed their minds all the time, she told herself as her fingers bit into her palm.

Maybe he would change his.

Michael sat alone in a courtyard outside an SVT training facility. London’s googles, tangled with John’s scarf, lay fallen at her feet, forgotten for the moment. Her delicate fingers cradled her face, her red hair spilling forward creating a curtain to shield her from the world. Michael’s shoulders, normally so proud and strong were hunched inward, as if she was trying to protect herself from a blow she desperately wished to avoid. They trembled and shook as John’s voice echoed in her ears.

He didn’t change his mind.