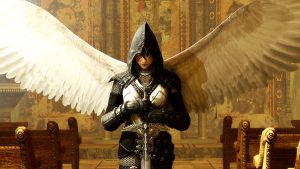 Uriel landed in the desert wasteland humans called Nevada. She sneered, the expression twisting her angelic features, as she took in the cracked earth and oddly shaped flora.

This is what they died for? What Ariel died for?

Her fingers flexed into a fist. The emotion was still sharp. After years of watching the humans devolve into anarchy, her hatred had only festered until it infected her very being.

But today it would change.

She felt the two land beside her, their soft footfalls belying their size.

“Today we end the human experiment.” Uriel’s voice echoed with the authority of an Archangel. The Angels behind Uriel nodded once, their faces an unreadable mask of serenity. Even in the innocence of their youth, they were ready to bring Uriel’s vision to this dark and quiet desert.

The lights in the distance announced their target. They had to start with SVT securities. Once they wiped them out, the rest of humanity would fall, just like the dominoes game their kind was so fond of. But this was so much more than a game. It was the future of the Angels. Their glorious, unbound future. Uriel pulled her sword from its sheath, it made no noise or sign of resistance at the plan to wipe out an entire species. After all, it wouldn’t be the first time the blade bought in the end of everything.

A breeze stirred the hair that rested at Uriel’s shoulder, and before her stood a dark figure. A hood obscuring their features, but it was clear they were Angel. As the figure lifted their head to meet Uriel’s gaze, red hair fell from the hood like a beacon in the dark night. The light from their eyes like a signal in the darkness, daring the shadows to try and extinguish it.

Uriel flinched at what she saw in that gaze. What she felt teasing the edges of her mind.

“Michael.” Her voice was full shock and awe. Michael was hunting down the remnants of the brotherhood and the Anunnaki still on earth with Gabriel. The pair had made few appearances in Angel society since the liberation of earth.

The stunned silence of the two young Angels behind Uriel could be felt in the minds of all Angels near as they bowed before her. Michael’s reputation was as fearsome as the woman herself and demanded respect.

The brilliant white glow of Michael’s eyes slowly faded as she felt the minds of those before her…and their purpose on earth, “This is not the path, Sister.”

Uriel slowly stalked to Michael’s left. “You hate them.” She levied the accusation at Michael, knowing the Archangel would not be able to deny the truth of her words,  “I sense it, in your mind. You tie yourself to a vow that you don’t believe in.” The look Uriel gave her friend was pitying, “Lucifer was wrong. Your love blinded you. You owe him nothing. But you will owe your people everything if you fail them now.”

Michael’s eyebrow twitched but otherwise she gave no inclination that Uriel’s words disturbed her conviction, “War within ourselves is not the answer, Uriel. I will not allow us to follow the humans down the path of self-destruction.”

Uriel’s grip tightened on her sword. The small action made Michael’s jaw tense with emotion. Emotion that they all could feel. Hurt. Sadness. The desperate need to make them understand, to have her words reach them before it was too late. “I won’t kill my own kind.”

“I’m not held by such foolish notions. That is why I will win.” Uriel’s eyes grew cold and distant, her voice turning harsh, “Starting by cutting out the infection that is Lucifer and his diseased ideology.”

Michael’s eyes cut to the two Angels behind Uriel, “Do not let her lead you down the path. Reach out and see its finality.” The young Angels looked unsure, they stood frozen behind Uriel.

Michael’s attention split as her sword came up to block Uriel’s attack, hearing the anguished screams of steel meeting steel.

Michael’s booted foot connected with Uriel’s chest sending the Angel to the ground. Her eyes moved to her sword. Oran touched her mind, and she felt their despair at clashing with another blade of an Archangel. “Forgive me, Oran.” Her eyes moved to the trio as she covered her blade.

“You cannot beat me without Oran, Michael.” Uriel chided her.

“Possibly.” Though, even as she admitted that possibility, Michael seemed unconcerned. “I can see now, Sister. That the only thing you will understand is violence.” Her foot slid through the red ash of this planet to widen her stance,  “So be it.”

There was a flash of white, and then Michael was gone. The silence left in her wake was only broken when she appeared on Uriel’s side and the heel of her palm crashed into Uriel’s head sending her to the ground. Michael’s eyes glowed as the emotion of that moment threaten to choke her, “Let me show you the path.”

And just as she was about to bring her fist down into the side of Uriel’s head, Michael felt it. The hot white burning agony of the power of Angel Sight rip into her back and over her wings. They were young, but the power of it still made Michael grit her teeth. She had not sensed their change.

They had much to learn. But Uriel was an archangel and all she needed was a single opening.

And this was it.

Her archangel blade screamed through the air and connected….

…but only for a moment, and not against flesh but Archangel steel, as the earth around them exploded. Uriel and the young angels who followed her fell hard against the cracked earth, skidding across the surface.

Gabriel stood there in his righteous anger, the dust of earth clinging to him. His teeth bared in a snarl as his Angel Sight exploded with ragged brilliant white light. The trio scattered, trying to avoid meeting their end on the planet they wished to condemn.

Michael got to her feet, blood dripping over her wings. She felt Gabriel in her mind, worried. Michael grit her teeth. “Enough,” her voice rang out over the desolate plane, the young children froze as they stalked Gabriel. Michael’s mind moved into Uriel’s. Showing her the path that stretched out before them and where this would lead. “Help me stop this madness, Sister.”

Uriel laughed, but it held no humor and the mocking sound bit deep into Michael. “You rather be chained to a dead idea than live your truth. You are a pretender, Michael. And I claim no such pretender as any family of mine.”

Michael’s jaw clenched, her pain felt by those around her, raw and uncontrolled. “You can’t win, Uriel.”

“No, I cannot win alone.” A sinister smile split Uriel’s beautiful features, “But I am not alone.”

Michael felt the other angels land around them, and her knuckles turned white as her nails bit into her palm.