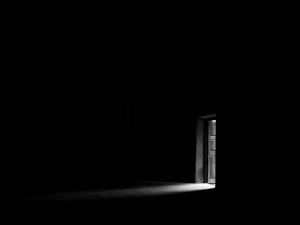 The more Dante spoke, the more he seemed to fade from her vision. Michael was use to this now, at least she didn’t pass out anymore when the memories came calling.

She hated being on her knees.

Michael pitied her human self as she heard Aria’s voice. She didn’t have the experience to know that Aria could not be trusted. Michael had seen it, though, in that first meeting with Aria. Michael knew. Aria had seen too much and what she saw broke her. Humans weren’t meant to remember their past lives, their minds couldn’t handle it. It infected them like a disease, the more they remembered, the more it destroyed who they were, creating a monster with no hope of salvation.

Michael felt the cool blade against her throat the moment before it bit into skin. She knew what was coming and her body tensed.

But her eyes weren’t on Aria. They were on him. Michael could see the rage and the sadness etched across his face. She could feel the echo of it move through her.

“I’m so sorry.” His voice broke as he cried out to her, but it was wrong. His voice never made that sound. She blinked as she felt something warm and wet move down her neck. Her fingers flexed and her nails bit into her palm. But…what normally happened next didn’t. And it made her hands itch, made them jerked against what bound them. She felt her body weakening, could feel that she wasn’t long for this moment.

Her life was made up of heart beats now.

She didn’t realize that she fell forward, all the sudden the cool surface of the floor wasn’t just against her knees, it was against her arm,

…and the side of her face.

…she felt his hand in hers. Felt her fingers squeezing tightly to try and remain, to stay. But she couldn’t. And as her world darkened, and the heartbeats came slower and further apart, she saw his tortured face.

And then it all went black.

When colored returned to her vision, Michael was herself again. She was walking with Lucifer.

These memories were beautiful. Painful but beautiful. Michael let herself live in this moment. Lucifer was alive. He was laughing at something she had said.

And for that one beautiful, painful, moment she was whole. She was home.

And then his words registered.

Michael tore her gaze from his face and she saw the cavern they were in.  She froze.

Terror, cold and unforgiving, snaked its way up her spine as the magnitude of that memory screamed through her mind.

She knew this place.

What it was. What it meant.

“No. No. No. Nononono….” Her hand let go of the one she was still holding to bury her fingers in her hair, even as some part of her mind realized that Lucifer’s hands were at his side as he looked at her with a frown.

“Nachos. Cookies. Good sticks.” She started shouting, trying to focus on anything else. Anything else but was tearing into her mind. “No. No. Distract me!”

But the memory continued to play out in vivid, horrifying, color.

“Lucifer.” She grit her teeth as she reached for the one thing, the one person that could save them. “He knew he was going to die. He went there…” Her voice broke now, “…He went there, he didn’t tell me. He knew.”

He knew it was the end.

Michael let it all in, everything she tried so desperately for decades to push out of her mind, came crashing back with devasting effects. The rock walls disappeared and in their place was…

Bloodied. The bright light that was so apart of everything he did was leaving his eyes as she held him.

Soulmates were so much more than humans understood. They were someone your soul recognized as yours. A connection that went beyond anything she had ever known. She would have followed him anywhere.

“Promise me, Michael…” Lucifer’s voice struggled for the words, he had never struggled for words. He effortlessly wielded them like a weapon to unite their people. To make everyone believe that peace was just within reach if only they stretched out their hands.

But his quiet voice that normally carried such strength wasn’t speaking of possibilities, of beginnings. No, his strong voice was stilted, weak, it spoke to her of endings. Even his last breaths had been for them.

It took her until now to realize they were also for their people.

For so long Michael resisted the images that howled through her mind, like a blow she wanted to avoid,  because it made her weak. It made her break. The broken pieces of her cracking with no hope of being pulled together again because the pieces that were supposed to connect were gone. “Lucifer…” She could feel the emotion so much more strongly as a human, and it …destroyed her just as it had before.  Michael’s eyes squeezed shut and when she lurched away from his words, from his bloodied face…she backed up into that memory. The memory Aria had bought her back for.  Michael could almost hear Aria laughing at the utter futility of what she was trying to accomplish.

Of what she was trying to forget.

Michael grit her teeth and she leaned into the horribleness of that moment. Lucifer’s face blocked out the rock walls and Aria’s mocking laughter. His voice killed everything else in her mind as she saw the bright light leave his eyes, as she felt one of the biggest pieces of her life, of what made her who she was, slip away.

“I once set a confession box on fire.”

Because she was alive again.

Michael’s eyes finally opened, her nails were biting into her palms as they pressed against her head.

And his face was there.

Michael closed her eyes tightly again, until white spots dotted the darkness. Not her family. Her family.

“Confession box…” Michael’s voice sounded breathless even to her own ears. She cracked open an eye, wracking her mind for what in the hellfire was a confession box. “ Oh, confession…where you speak of all the horrible things you’ve done, yes?”

She laughed quietly under her breath, he would set that damn thing on fire.