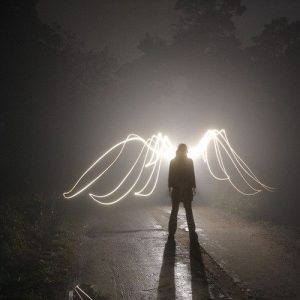 Fate whispers to the warrior, ‘you cannot withstand the storm.’

And the warrior whispers back…

Michael stood there carefully holding the mechanical parts she knew were going to be important for Coda’s upgrades or London’s creations later. She turned to Ezekiel and shifted the parts he was holding to make sure they were stacked and equally distributed to avoid dropping them.

She looked over her shoulder as she exited the ship and saw Noodle Human behind them. He seemed better. She smiled faintly, Lucifer had that effect on people. He showed them the way that otherwise would have been unseen. Her heart gave a painful tug, and her smile faltered. She wondered if she would ever be able to think of him without the sadness.

Lucifer should be here.

Gabriel and Lilith should be here.

They would be able to do this better than she could. They would know how to help the humans. Instead Lucifer was dead, Gabriel was in a coma with no soul, and Lilith was missing.

Michael took a small breath, she had to do better to encourage them. They needed to know they had what it took to accomplish greatness. Belief in one’s self was important. When the time came, it would tip things in their favor. Sometimes that’s all it took.

She stilled when she heard the man call Dante “Dad”, her eyes moving to Dante. Michael tilted her head to the side, watching him carefully. This was what Dante wanted. He wanted to find his son. Why was he just standing there? Why was his face twisted in such a way? Michael’s eyes moved back to the man in front of them and her jaw tensed. She was beginning to understand the more than man called shooter spoke. This was not a happy reunion. He wants his child, not his child reincarnated as shooter.

Michael recognized his soul though. For a moment all she saw was the child in the street as the world fell apart around him. The tears streaming down his face as he clung to his father.

Michael remembered the look of desperation on Dante’s face. A kind of desperation born of no options when all you wanted was one. One to save the one you loved most.

Her eyes refocused on this moment. He deserved this.

A small voice echoed inside her and Michael frowned.  She pulled her gaze away from the father and son, whatever mess Dante was in was his own. It was no concern of hers.

Her gaze landed on London and she tilted her head to the side. Michael’s gaze moved over London’s posture, she looked like she was going to be ill. Her brow furrowed but she remembered at the Kalturo base how she wanted to be left alone and decided that calling attention to her obvious discomfort would only anger the human.

Michael’s jaw tensed. Her humans were suffering. In a million different ways and in one singular way. How would she fix this for them? How could she make them ready for what she sensed was coming?

“We need eight.” Coda’s voice cut into Michael’s thoughts and she latched onto the request.

Eight would be difficult to get. This she could fix. “We can fly.” Michael supplied helpfully.

“I don’t think you will be able to keep up with a motorcycle.” Coda said slowly.

Michael laughed, human humor could be strange at the best of times but it was a laugh she needed. It helped dispel some of the worries she carried.

… But then she realized no one else was laughing. She paused searching for the curse word she heard them use often. “Shit. You’re serious?” She smiled faintly, trying to understand the unease she could feel moving through the group.

“I would be able to…keep up.” Ezekiel’s voice was tentative, unsure. Michael looked over at him and tilted her head. He should not be unsure of his abilities. Her eyes moved over the young angel’s face. He looked…regretful? Michael’s brow furrowed, her confusion clear.

The realization came to her as she searched his mind. Her eyes widened. No, not regret.

“Are you saying I can’t?” Her voice was sharp, too sharp perhaps based on how the child’s face cringed.

“I’m not getting on that primitive piece of technology.” Michael said flatly, “I can keep up.”

The silence that met her statement was deafening. They doubted her.

“Michael, you need to listen to me right now…,” Her gaze turned to ET as she spoke, “You’re human now, you’re limited in what you can do…” Michael’s eyes widened.

This was…how they saw her?

Michael pulled her gaze away from ET and looked at her companions. This was…what they thought of her, she realized in a stark moment of understanding.

Her eyes narrowed and her jaw tightened for a different reason.

Michael’s eyes fell to the robot parts in her arms as the conversation continued around her.

A glorified pack mule. A pet.

A human, worse, one who didn’t know her own limitations.

Michael remembered when she first learned of humans. They were a wonder to her. They created such beautiful things despite their warlike nature. The parallels with Angels were not lost on her. But where angels search beyond themselves for war, humans….humans waged war on themselves. Michael use to think that it was because of the Anunaki, but in the years after the war she learned the truth.

Humans were cannibals. They devoured themselves.

After the war, she saw the humans tare each other apart. She saw how they took Lucifer’s sacrifice and cast it aside, as if it was nothing.

Worse than forgotten. He became some mythical devil created to tempt humans. After everything he did…humans still chose to believe in the propaganda of the Anunaki . To condemn their savior.

Without Lucifer, Angels were devolving. They no longer search for wars among the stars, just as Lucifer wanted. But unlike Lucifer’s dreams of peace, we emulated those we wanted to protect,  the humans so many of us disdained.

And we devoured ourselves.

The civil war between the Angel factions was jarring, with no hope for peace. Both sides righteous in their vision for the future of their kind. A conflict within oneself that made you question everything you thought you knew. Everything you thought you believed in. Asking her to choose. Asking her to …decide. Her name had weight, it could make a difference. The war of Angels made Michael feel old. Made her feel tired. Made her feel…defeated.

Maybe Humans and Angels were no longer so different.

‘I’ll follow you anywhere…’ Gabriel’s voice echoed in her ears,

‘…But please, Michael, don’t make me follow you there.’

Michael’s hands flexed over metal, and her eyes lingered on her fingers.

Her wings shifted under skin, pulling at the wounds that would never heal, making her back itch.

Much like herself at this moment, the bitterness of that thought surprised her.

Her human was beautiful. The way she saw the world made Michael wonder if they really shared the same soul. But for all their beauty, humans were weak. She was weak. Michael swallowed roughly at that realization. She was human and she was…weak. Her grip on the cool metal tightened. The emotion threatening to choke her. She hadn’t had trouble with controlling her emotions since she was a child and yet…as a human…she was childlike.

But in not acknowledging what she was, she risked them all. And that…that could not be allowed.

Michael could not fail. Not at this. Not again. Lucifer’s bloodied face flashed in her mind. Gabriel’s soulless eyes bent on death haunted her steps. The silence where Lilith should be deafened her. Her soul wouldn’t survive it, she felt that truth in her human bones. Michael needed to win this fight.  So when she saw Lucifer again, she could tell him. Tell him that she kept the promise that meant so much to her. So that she could save Gabriel, save his soul.  So that she could find Lilith. Michael had often avoided thinking of Gabriel and Lilith. Because the more she thought about them, the more the emotion that she couldn’t control tried to choke her. Tried to destroy her.

She reached out, not for the first time, and tried to feel for their mind.

Horrifying things could happen in silences.

Michael took a slow shaky breath that steadied on the second exhale. Then she reached, reached deep within herself as the ancient Angels taught her. Michael followed that breath inside her, and the emotions got quieter, got smaller. At least, there was enough Angel left inside her for this. The chaotic doubt that threatened to choke her, that made her question…all fell away.

Her eyes grew colder, the curiosity and light that had grown into her gaze over their time together was slowly dimming.

And in her place was Michael.

The Archangel. The weapon of Heven. The wielder of Oran. The terror of the Anunaki.

No, she wasn’t human. She was Angel. Trapped inside a frail human body. The human body was weak.

But the soul of the Angel was strong.

The soul of an Angel could make the difference when the balance needed to be tipped.

Her fingers loosened, and the parts she was holding fell to the ground. Surprisingly, the sound wasn’t loud in the hanger. It felt wrong that such a big shift would happen without a sound that shook the earth. But Michael knew horrifying things happened in the silences.

Promise me, Michael… Promise me you’ll save them.

That you’ll save them all.

Her eyes slowly opened, glowing faintly. The light caught the dust particles in the air and burned them in wisps of white smoke that framed her eyes. There was nothing human in her gaze.

She knew who she was.

She knew what she was.