This Dream of Ours 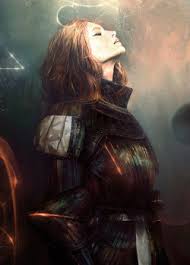 The wind whipped Michael’s fiery hair across her face, as she tore through the skies. The huge expanse of her wings eating up the distance as if she had just flew the world several times over. Human eyes couldn’t perceive her, no longer limited by a human body. Though, it was funny, Michael no longer thought of her human body as limited. She slowed and landed on a nearby building. Michael’s eyes glowed as she stared out over the city.

Her mind was quiet, no pleas for help or to be saved. Everyone was provided for. Her eyes scanned the streets, the buildings, that looked foreign to her…but at the same time were familiar. Both parts of her soul providing memories that were almost conflicting. What she remembered of earth, to what she knew became of earth.

Lucifer’s dream had finally been realized.

A small smile pulled at the corner of her mouth. The fragmented pieces of her soul that had seen the destruction of earth in the dark timeline felt healed, felt whole looking at how the known worlds had changed. She went and saw them during the last five months. Saw the peace that was on Heven, how angels were more than war now. They had their own music, it wasn’t just war drums, they had their own cuisine, it wasn’t just about nutrition …it was about taste. They had art. They laughed more.

Michael thought of Ezekiel’s smiling face as he spoke of London, they fell in love.

She had even gotten a tattoo. A rose. In honor of her human life. Lilith had loved that. A beautiful contradiction, she had called it.

And the humans? The humans had peace. They no longer were taring each other apart.

She looked up at the sky, seeing how the atmosphere had healed. They did it. They pulled earth back from the brink.

Michael closed her eyes and lifted her face to the sky, she didn’t fail. Not in this.

“I’ll protect this dream of ours.” Michael wondered if Lucifer got to enjoy it. If he was living a peaceful life. She wondered if John and Etienne were down there right now…having a…coffee? Yes, coffee.

You could look for them.

Michael smirked. “After everything they did for us, they deserve whatever peace they found in the next life. And we both know that peace doesn’t follow me anywhere.” She tilted her head down, surveying the world beneath her. But even in the face of so much hope, Michael searched. Searched for what, she couldn’t say but she could feel it. Deep in her bones, no deep in her soul.

Michael could feel it.

What is it, old one?

The veins near her eyes turned black and pulsed. Her traveler pushing back against her angel body’s suppression to see through her eyes.

That sounds appropriately ominous and vague for someone of your age. Maybe I should talk to the angry reformed drunk. You think he wouldn’t mind being a condo?

Oh, look at you using idioms.  Here’s another one for you, Michael….

…the devil is in the details.