Many things happened while she was with the Red Guild, most of which she’d never want to tell her pack. Was it shame? Guilt? Or fear they wouldn’t trust her anymore? Probably all. But there are some memories she keeps even closer to her heart. 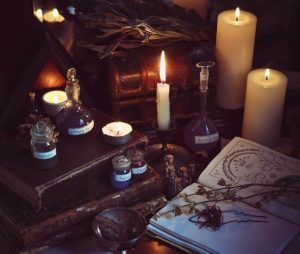 Depending on the company one kept, being within the Red could be a respectable organization to align yourself in. If you were well indoctrinated, you saw them as your family, above all else, a very close family. On the surface upon first entering, the Red Guild was just plain odd. A mismatch of individuals that either didn’t belong where they were, or were eager and ready to work to earn their security. If you were fortunate or unfortunate enough to be in a place where a great many members were taking refuge in the same place, you’d see a great diversity of people with even greater diverse personalities. From powerful noble families, to the downtrodden, to the merchant, to soldiers, even children. Children like Aevis. She is twenty-seven years old now, but has been with the Guild since she was eleven years old and she loved them dearly. They were her family. She would do anything for them.

Her belief and love for them would be tested when she met someone that saw things a bit differently.

I can do this. Sighing to herself, she splashes water onto her face. It was such a long day. Ever since winning the Guild’s favor and in turn prolonging her life, the training she was receiving was long and arduous. Talithey didn’t know if it was just silent rebellion or just not being particularly talented at anything, but oh the last couple of days she was not doing well.

“I just don’t understand why they can’t just keep me on what they know I can do.”

Wiping off her face and casting the bit of cloth aside, Talithey carefully navigated her way past the shelves that housed many veils, mortar and pestle sets and other miscellaneous alchemical equipment that she didn’t know the names of. Aevis was the Guild’s one and only alchemist. Not many would devote their lives so strictly to the delicate art of potion making, but she was one of them. When Tali first joined the fold, they would make her go to Aevis for tonics to help manage fatigue and for deeper sleep. Even though the tonics weren’t exactly ‘optional’ and she still had to take them, she still made it a habit to go to her at the end of every day for reasons not related to the tonics.

There were not many in the Guild she’d want to spend time with, but Aevis became such a close friend

“They need you to be the best of us. Someday you will be perfect for this family. And you will be.”

To some that didn’t know her, Aevis might have sounded a bit short with her, but much the opposite. She believed in things with such certainty and clarity.

Aside from martial melee training, they taught her much of the art of stealth and then some. That’s where she was the most comfortable, but most of the things they tried to teach her nowadays she would fail many times over. In theory, she’d understand it when questioned, but put into action, a whole other story. When she’d go to sleep at night she feared they’d realize they made a mistake and dispose of her but…They never did. Balgrim was annoyingly intelligent and very patient with her and would try her at other things to find her talents. Today was one one of those days. He and a close elite member, tried yet again to teach her their methods of removing information from individuals. Her stomach just couldn’t take it. Instead they learned that she has a natural talent for Telepathy based methods. They made her practice that through interrogating people for hours out a time.

With an exasperated sigh, letting her head fall back a bit before sitting down with Aevis at her brew station. Perhaps a touch dramatic.“So you’ve said many times before. But that’s what they think. What do you believe?”

“I believe ever since I met you, you have been the most stubborn twat I have ever had the pleasure to lay eyes on.” Aevis’s voice was such a mixture of amusement and feigned weariness. “It will get you trouble with him someday. I do not want that for you.” Gingerly reaching out and brushing away strands of hair from Talithey’s face.

Every morning and evening they would speak, occupying each other’s free time whenever possible. The gratefulness she felt for Aevis’s friendship was indescribable. As time went on the feeling of loneliness was lessened and every day she got a reprieve from the intense grip of her masters and the sting of grief she had not yet processed.

Talithey’s eyes darkened for but a moment as she said, “I could just kill him now. Cut off the head of the snake and no one would have to worry about trouble.”

“Do not make your time here any more difficult than it has been. We need him. You need him.”

How can she believe that? I don’t need him. I never will. I’ve seen who he is, why can’t she see it? I should’ve poisoned him instead of the others. Why didn’t I? Why didn’t I think to do that? Ugh. I won’t lose who I am, I won’t.

Gods above, she hated how fast memories came to play. You see, every few months or so Balgrim would choose roughly half a dozen recruits he ‘favored’. He’d give them very specialized training. Mold them into whatever he needed from them. Eventually, these half a dozen people would be pitched against each other. And whoever was left standing got to be his apprentice of sorts. This never worked though, they’d all just end up killing each other so no one remained. Tali was among the chosen this time around, but she handled the situation a bit differently. A slave boy she befriended suggested she slip poison to the other recruits so she could live. They were so much more skilled than she was and seemed to be the only way to make it through. She hated herself for doing it but she did, she absolutely did. She wanted to survive. She got the poison from Aevis but she didn’t really know how to slip poison to someone in a clean way, so she poisoned the whole water supply they had. She ended up killing the six she needed…along with an additional thirteen. She expected her own death for doing it but Balgrim loved it. Fight smarter not harder. She was the first to make through his ridiculous tradition.

Her eyes closed hard and she lightly shook her head. She honestly wasn’t sure if she was just getting a headache or her brain was actually going to split in two. Between Aevis’s encouragements and her anger for the guild, the dispute of the two sides was strong. She hated it so much. This shouldn’t even be a problem, why is this so hard?

Just when she could feel the stress making her hands tremble and her heart pulse harder, it was crushed back down when she felt Aevis’s hands take hers and soft warm lips against her own.

While that took her by surprise, she didn’t stop their kiss but allowed it to continue for what seemed like ages. Finally, Tali pulled away from her, canting her head curiously to the side and just starred at her for a moment. Her mind felt a bit fuzzy, her heart still beating hard, but at least for a different reason.

“…You can’t silence my opinions by doing…that.”

“My intention was not in fact to silence you.” Aevis slowly got closer, giving Tali plenty of time to move away if she wanted, gently placing both hands on either side of her face. “Would that be alright?”

“What? To form a whole other set of opinions? That’s alright.” Even with her face all flushed, she still couldn’t pass up the opportunity to be a smartass.

It felt like everything just blissfully went away that evening. Everything that always rests heavy in the back of her head just ceased to exist in those loving moments. Each fear disappearing one by one with each touch of tender skin. In the morning when Tali wakes, she can’t help but giggle to herself, with the knowledge that this literally happened in an alchemist den.

Their closeness carried on for a couple of weeks. While it made her time here easier and she genuinely did care for her, there was a lot she just wasn’t seeing, if she did see, she turned a blind eye to it, or she just hoped it would change with time. Talithey knew Aevis was severely conditioned to the guild, knew damn well, but hoped so much she could help her, maybe even someday get out and bring Aevis with her.

They did well to keep their infatuation secret but he found out somehow. And it just…it bothered him. It was such an easy thing to rectify though. It was immediately fixed when Aevis was summoned to him. What is it they say? Two birds one stone? He was going to test her loyalty to them by ordering her to kill Tali, all while seeing if his favorite protege could survive. When he gave her the order, Balgrim never once threatened the life of Aevis, he didn’t need to. Abandonment was more than enough to threaten. If Aevis couldn’t prove her loyalty she didn’t get to stay with them. They are family. They have been family for years.

What choice do I have? I am so sorry, but I must.

The thought stung like a knife. She did not want to hurt her, but they were gonna leave her behind.

She chose this twisted occupation.

She made her choice when the quiet silence of Talithey’s quarters was broken by the gentle prick of a lockpick against tumblers. the only thing that really saved Talithey from getting her throat slit while she slept is she never took her sleeping tonic that evening and she was naturally a light-sleeper, especially nowadays. And Aevis was an alchemist, not a fighter. Not like Talithey. There was a struggle through many a desperate plea for her to stop, that she didn’t want to hurt her. But Aevis might as well have been a dissociated puppet. Whether she actually heard the pleas, there was no way to tell. She had Tali pinned down, with the knife to her throat, but she reached the shiv that was hidden on her person and shoved it through Aevis’s temple. Through heavy breath, she gently lowered Aevis’s body to the floor and stayed with her.

After a long while she could here another person entering her room. She didn’t care. She knew who it was anyway. As he walked in, he quietly spoke, “Maybe now I will finally get through to you.”